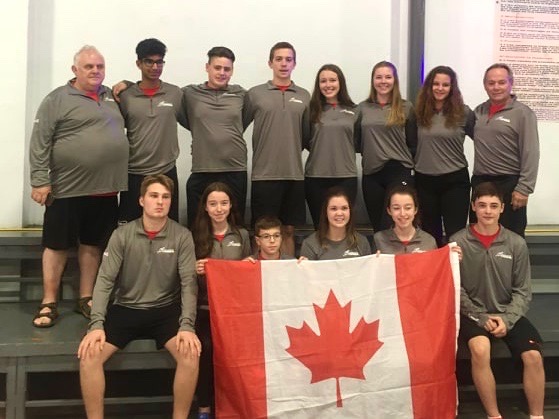 WINNIPEG, MB (November 8, 2019) – Twelve athletes from across Canada will begin competition this weekend at the International Racquetball Federation’s Junior World Championships being held in San José, Costa Rica from November 8 to 16, 2019.

Team Canada will be led by veteran athletes Cassie Prentice (Macrorie, SK), Juliette Parent (St Jacques de Montcalm, QC) and Sean Sauvé (Valleyfield, QC) who have all competed for Canada at the junior level several times. Prentice and Parent won silver at the 2018 world championships and Sauvé won bronze twice in boy’s doubles in 2018 and 2016.

The team will be rounded out by Kelly-Marie Barrett (Leamington, ON), Kyle Dick (Wheatley, ON) and Asher Pocsai (New Hamburg, ON) who are all competing at their first international event.

The coaches for Team Canada will be Michel Gagnon of Montréal and Rino Langelier of Brossard, QC.

Selection of the Junior World Championship team was based on results from the 2019 Junior National Championships held last April.